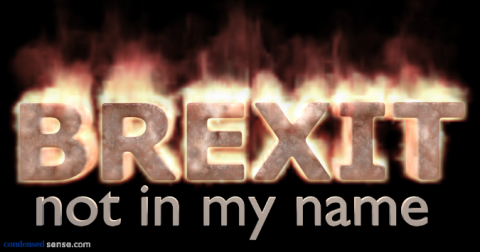 You can stop Tory and Labour's extreme version of Brexit. It will take about 3 minutes. Here's how.

The best analogy we can find for the next election is of choosing contemporary Britain's mode of execution: disembowelled by Brexit, and ready for the coup de grace, which executioner will you vote for?  For many it will be an impossible choice.

Tory and Labour have designed their own Brexit (not ours) and are striving to force it through to our detriment (why would we relinquish our single market freedoms, protections and economic growth just to enable their ideological experiments? We obviously wouldn't, which may be why they're denying us any further say)

So both of them refuse to countenance another referendum, wishing instead to claim the next election as their final mandate for doing whatever Brexit they like.

The far left and far right politician's refusal to separate long term Brexit decisions (leading to events that will impact a whole generation) from the short term election cycle will create impossible paradoxes for many people.

When there are so many factors bound up in one election, with implications stretching for decades, with constant mis-information still flowing from some politicians, and when we only know the politician's (often wild) fantasies rather then the actual future trading conditions, how on earth is that election going to achieve a fair result that is representative of the people's actual wishes?

UK politicians are making a democratic outcome for Brexit nearly impossible.
Forcing people to pick options that they don't want,will not unify the country.
Tories and Labour are driving the UK into a Hobson's choice game of Russian roulette in which those extreme politicians win (they get to drag the UK out of the Single Market, gifting themselves new ideological toys as a result) but the whole population loses (as we have to pay the price for their ambition).

This is genuinely - for a change - about taking back control, from our far left and far right politicians, before they force an idiotically extreme Brexit upon us. ​

Email or write to your MP and tell them what you think.

Here's some "starter for 10" suggestions of what you could say (in case they are useful).


followed by "thank you", "regards" or the like (more than ever in these crazy times, we need to stay polite and to remember that some of these politicians are - at risk of their careers - still fighting to get their parties to put people and nation before ideology)

You can very easily write to your MP electronically now (here)

​Step2.
You then don't vote for any party that is trying to force you to accept their Brexit, in either local or general elections.


It is that simple. Whilst Labour and Tories are recklessly and selfishly damaging the country, we don't vote for them. It is called democracy.

The potential impact of this approach relies on how each individual responds.

In other words, if you leave this to others to do, the UK continues to slide into chaos. But if you take action, now, this crazy version of Brexit stops.

Do you believe that Brexit is a disaster? Have you told your MP yet? They won't know unless you tell them. You can find out who your MP is by postcode (here) and then find their contact details (here) or just write direct from this website using your postcode (here)

EU leaders have made it clear the UK still has good options around staying close to, or even in the EU, especially if the demand for change in approach comes from the people. The main blockages here are the extreme pro-Brexit UK parties (Labour and Tory) and they will be the last to admit that the damage is out of control: it's imperative, if we don't like what's happening, that we tell our politicians that we've had enough of reduced GDP, increased home-grown far right terrorism, escalating job losses, food rotting in the fields, increased prices in the shops, and the thousands of other negative - and sometimes cruel - impacts.

Deciding to leave the EU is logically in-explicable to many, but then allowing our most extreme politicians (left and right) to pick the most extreme exit options is just crazy.  You can easily write to your MP electronically now (here)​

Contacting your MP may lead to another referendum which would require all options to be put back on the table. What happens then? Leaver voters might lose. Alternatively, remain voters might lose. But at least we'd know what Brexit option the *people* (not the politicians) want and whatever the people choose would not be as crazy as the Labour and Tory choices (their Brexit approach resembles dogs chasing a bone, i.e. they're simply not thinking straight).
It seems essential that the people take back control and that starts with you contacting your MP.

Tags:
Brexit
Ideal gifts for your "Brexit Rebel"
Ten reasons why continuing with Brexit is a stunni...

Ten reasons why continuing with Brexit is a stunningly bad idea.