In 2016, as the dust settled from the UK's surprise referendum vote to leave the EU, the Tory government assembled a new cabinet who announced that the referendum showed "The Will of the People" and therefore the delivery of Brexit must be regarded as an almost religious duty; the Tory papers joined in and promulgated this idea (democracy has spoken, Brexit must be delivered), even to the extent that one of the most poisonously bilious of tabloids denounced judges ruling on Brexit as "Enemies of the People" (Ignoring the well known fact that Law is a necessary foundation and companion to democracy, not its enemy: without law, Brexit is just a right wing coup).

One year on, supporters of the leave vote are still using the same argument - "democracy must be respected, the UK has made their choice" despite the fact that it is spurious garbage.

So here's a quick summary of why it is now ok to laugh, gently of course, if someone tells us Brexit is the 'Will of the People'.

Dubious origins of the 'Will of the People' phrase:

52% of the referendum vote was for leaving the EU; that represented 37% of the electorate or 26% of the population.   Are any of those figures actually sufficient to change the fundamental fabric of a nation without inevitable dysfunctional division?

In project terms, the government are going against the will of at least half the stakeholders - in a project at that point ploughing on would be disastrous, you would either work hard to understand and reach agreement, or cancel the project.

The referendum legislation (to enable the vote) that passed through parliament made it clear, that the referendum was advisory, so there was no need for a super-majority (i.e. at least x % of the population with a margin of at least y% in the vote).

Before the referendum result was known, at a time when it looked like a narrow win for remain would be the outcome Nigel Farage, agitator in chief for Brexit, was strongly in favour of a null vote being declared if there was no super-majority,

But as soon as leave won the vote, we heard no more on that point. The right wing agitators for Brexit, hardly believing their luck at manufacturing such a masochistic decision from the British public, decided that this moment must be grabbed.  So they eschewed proper sensible change management and research (as this site satirised here) and used meaningless slogans to bully the British people into accepting their fate ("Brexit means Brexit", "the Will of the People", stating baldly (and wrongly) that the UK's exit from the EU was now inevitable), with right wing papers even saying the Queen of Britain was in Favour - a lie which she gently declaimed here.

So, which single moment in time do the extreme Euro-sceptic politicians in charge, think is the immortal will of the people? 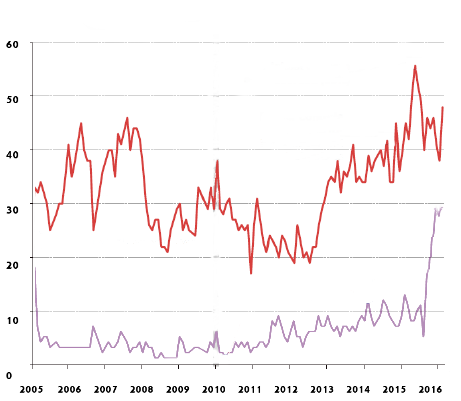 ​If we look at the lower line on the graph, we find a range of opinions gathered over time on UK attitude to EU membership.   The question is simple: which one of those samples is the single measure of the 'Will of the People' which must be carved in stone and used to guide every future decision on Europe ?

Our extreme politicians in the UK are trying to convince Britain that it is the 2016 result.   There are plenty of other moments in time though that we could have picked, as follows:

The opinion we must respect, we are told by both extremes of the political spectrum, the one that is being used to thrust the UK into the most self abusive destruction over the next 10-20 years, is the 2016 result.

But despite all of that, Democracy must be suspended apparently, no more opinions needed, we must all be quiet now and just let Brexit happen.

​'The Will of the People' and democracy.

The phrase is supposed to enshrine the importance of democracy and yet, in order to deliver the demon baby of Brexit, it is apparently fine for politicians to strain every sinew to avoid acting democratically.

The Tories were taken to court over their lack of democratic respect on article 50 and they lost.

The Tories are proposing the exit bill power grab which removes much of the need for the executive to respect parliamentary democracy.

The same bill also proposes giving the Tory cabinet the power to unilaterally decide when they have a deal (or no deal), and allocate an 'Exit Day' upon which our membership of the EU will cease (all ideally, it seems, without further need for the executive to run anything past Parliament, let alone the people).

And the government is trying to bully their MPs into voting for this bill (see the links at the bottom of this post).  Apparently circa 73% of all MPs believed that Brexit is a bad idea for their constituents, but their leaders continue trying to whip them into supporting it.

So attributing the Brexit car crash to some religious need to respect democracy is balderdash.  "The Will of the people" is not an argument; it's just a manipulation by our extreme politicians (left and right, both pursuing their ideologies at our expense) and an excuse for rushing Brexit through, avoiding any due process around it.

Why try to avoid due process?  Because the UK's current political leaders want Brexit, and because that due process would have shown the hazy benefits to be pure smoke and mirrors and the costs to the population, too great to be accepted.

Those who still use 'The Will of the People' as justification have either been manipulated into believing it or are attempting to manipulate.